So, I was reading a post at Snoozing on the Sofa and he was talking about his young boy (the eldest of 3) was playing soccer.  Which got me to thinking…

Growing up in Southern California, I had a mom who thrived on all sports.  I grew up listening to my mom yell down the neighborhood during basketball season and the Lakers when Magic Johnson would do amazing things, and Kareem Abdul Jabar would do his signature “skyhook” and they were beating the Boston Celtics with Larry “break-the-beak-nose” Bird.  (yes, she gave them nicknames).  Cry-cry Danny Ainge (wha-wha)…and she’d beat on the coffee table.

Then there was the baseball… Die hard Dodger Blue.  I sat so many times in “Baker’s Acre.”  (outfield) and we’d listen to Vin Scully on my mom’s little black radio while I ate HUGE Carnation malts.  (now they are more $$ and much smaller, so sad.)

Then there was football (American Football)- every Sunday (seemed like all day) and Monday night… I didn’t usually stick around for that.  I think I could watch maybe 5-10 minutes.  It seemed the RAMs always sucked, and then moved and my mom liked the Seattle Seahawks and hated San Francisco.

Then my stepdad threw in some college games of each sport here and there, and there was the occasional Hockey…which I wish they had watched more because that seemed interesting… fast paced like basketball.

Suffice it to say, there was always sports on at our house (and then news/60 minutes) – and in all that- never was there soccer.  My mom didn’t like or understand the sport.  She thought it was boring and I did too.

Introduce my husband years later, he grew up playing soccer in Southern CA.  He played all the time, and on travel ball, and essentially was very good and was disappointed that he let a  highschool coach put in his head that he wasn’t good enough to play for UCLA.  My husband attended there and earned his engineering degree in areospace.  During that time, he watched their soccer team and realized he was just as good (or better) than some on the team, but by that point had stopped playing.

Flash forward to kids:  We  started our son immediately in t-ball, at 3-years – 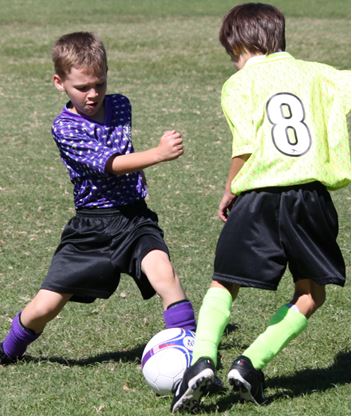 old. He LOVED it.  Not once did soccer occur to me.  Then one day, when our son was in kindergarten, my husband said

And I’m not gonna lie, although so stinking cute were these little dudes running around, thank goodness it was a brief period.  My husband told me to give it time and I’d end up loving the sport.  At 5-years-old, they all just kind of ran around in circles and bumped into one another.  And falling down, a lot of falling down!  If anything, it was amusing.

Flash forward a couple of years, we live at the soccer and baseball fields.  Seriously, we should set up a tent.  My daughter is 9, and my son is 11.  Now, it’s starting to get good because they are understanding the soccer game and getting down some skills.  I’m loving it more than the 2 hour Little League AAA baseball games.  It’s good!  It’s exciting!  Meanwhile, I still don’t fully understand “offsides.”  Funny, when the boys were 8 , about the time they started calling “Off Sides.”  my friend and I would yell GO GO and then everyone would stop because apparently there was some dang whistle.  What’s this off-sides everyone keeps speaking of?  We’re just gonna start yelling “off sides,” whenever we don’t understand something.  Now, I’m kinda getting it, but don’t really care if I ever fully understand.  I’ll still keep yelling “GO!” regardless.  Why are you stopping?

P.S.  The photos of my son playing soccer are from 1st grade.  I don’t remember them being that aggressive back then.  Holy Cow!  And, awesome team banner I had designed, huh?  Oh, heck, there was a rare moment I caught the kiddos together last Fall… quickly after I snapped that shot, I heard my boy yelling at his sister “get off me!”  It was a rare hugging moment (lasting seconds) that didn’t involve pinching one another or trying to squeeze the life outta one another.

17 thoughts on “My introduction to Soccer”

Got anything to say? Cancel reply